Guardian moderators, who deal with 40,000 comments a day, believe there is an orchestrated pro-Kremlin campaign 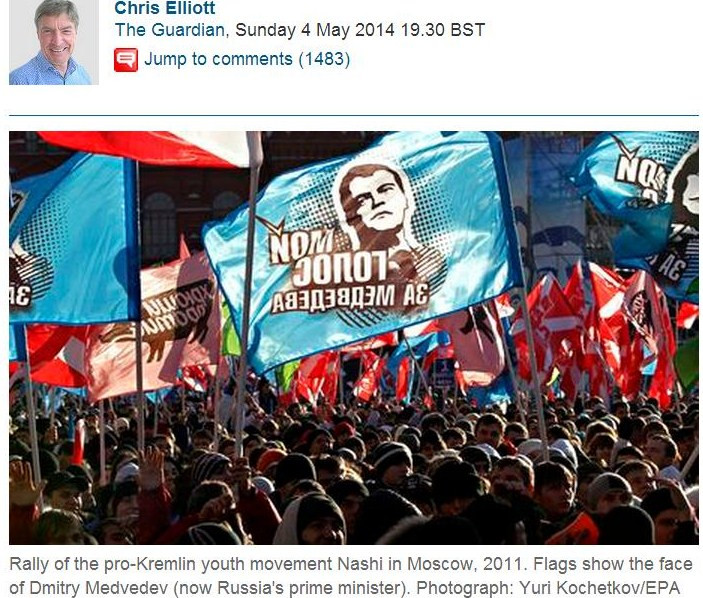 Trolling covers a multitude of sins but a particularly nasty strain has emerged in the midst of the armed conflict in Ukraine, which infests comment threads on the Guardian and elsewhere, despite the best efforts of moderators. Readers and reporters alike are concerned that these are from those paid to troll, and to denigrate in abusive terms anyone criticising Russia or President Vladimir Putin.
One complaint came to the readers' editor's office on 6 March. "In the past weeks [I] have become incredibly frustrated and disillusioned by your inability to effectively police the waves of Nashibot trolls who've been relentlessly posting pro-Putin propaganda in the comments on Ukraine v Russia coverage.
"... the quantity of pro-Kremlin trolling on this topic … which has been documented extensively since 2012 as a real and insidious threat to online communities of idea and debate, has rendered commenting on these articles all but meaningless, and a worthless exercise in futility and frustration for anyone not already being mind-controlled by the Kremlin."
On 23 April the writer complained again: "One need only pick a Ukraine article at random, pick any point in the comments at random, and they will find themselves in a sea of incredibly aggressive and hostile users (the most obvious have accounts created since February 2014 … but there also exist those who registered with the Guardian before the high point of the crisis) who post the most biased, inciteful [sic] pro-Kremlin, anti-western propaganda that seems as if it's taken from a template, so repetitive are the statements. Furthermore, these comments are consistently capturing inordinate numbers of 'recommends', sometimes on the order of 10 to 12 times what pro-Ukrainian comments receive."
Luke Harding, the Guardian's highly experienced former Moscow correspondent, who was expelled in 2011, is in no doubt about the nature of the campaign and how damaging it is to debate in the threads. From Ukraine, he said: "It's a well-attested phenomenon in Russia."
On 7 February 2012 the Guardian reported: "A pro-Kremlin group runs a network of internet trolls, seeks to buy flattering coverage of Vladimir Putin and hatches plans to discredit opposition activists and media, according to private emails allegedly hacked by a group calling itself the Russian arm of Anonymous.
"The group has uploaded hundreds of emails it says are to, from and between Vasily Yakemenko, the first leader of the youth group Nashi [and] now head of the Kremlin's Federal Youth Agency, its spokeswoman, Kristina Potupchik, and other activists. The emails detail payments to journalists and bloggers, the group alleges."
At the time no one from the group was prepared to confirm or deny the veracity of the emails, which were sent between November 2010 and December 2011. Harding said that it was obvious the trolling on Ukraine-related issues was organised, as the trolls "are given talking points" and certain phrases were used again and again. The complainant to the Guardian said: "They still post only extremely biased, offensive, trolling commentary – including insulting your correspondent, Luke Harding, whom they libel as a 'Russian hater' and mock as 'Luke Happyman'."
One comment read: "Yes, sir. You are certainly correct. Sometimes I wonder how many of the top people in the new rightwing pro-Nato Guardian are privately educated. I imagine that Russian-hater Luke Happyman was but do get some state-educated sxcum [sic] as well. Still, if anyone knows, please inform us before the censorious moderators get to work again (again)."
In fairness there is no conclusive evidence about who is behind the trolling, although Guardian moderators, who deal with 40,000 comments a day, believe there is an orchestrated campaign. Harding, who is inured to the abuse, would simply like better systems to deal with it, as would the moderation and community teams.
A senior moderator said: "We can look at the suspicious tone of certain users, combined with the date they signed up, the time they post and the subjects they post on. Zealous pro-separatist comments in broken English claiming to be from western counties are very common, and there's a list of tropes we've learnt to look out for. These posts may be suspicious but it's when the content of them breaks our community standards that we will step in.
"A larger problem on these threads is users accusing each other of being "bots", "trolls" or "astroturfers", usually wrongly. These accusations do break the community standards (they're essentially abusive statements) and moderators take a hand here. We will also, obviously, act against abusive statements at the expense of our writers, of which Luke receives a substantial number. Those are more likely to be the reason for us taking action on these threads. It's only when an account crosses those lines that we step in."
Here are three Ukraine-related stories and the numbers of comments listed and removed for reasons of abuse.
• http://www.theguardian.com/world/2014/apr/28/ukraine-journalists-media-freedom
: 171 comments listed, real figure: 244 (74 removed)
• http://www.theguardian.com/world/2014/apr/27/ukraine-donetsk-pro-russian-forces-seize-tv-station-parade-captives: 2,149 listed, real figure: 2,310 (161 removed)
• http://www.theguardian.com/world/2014/apr/27/ukraine-kidnapped-observers-slavyansk-vyacheslav-ponomarev: 2,004 listed, real figure 2,263 (259 removed)
The final word goes to Luke Harding: "It is not Comment is free, but rather Comment is paid for."
Tags: guardian
Subscribe